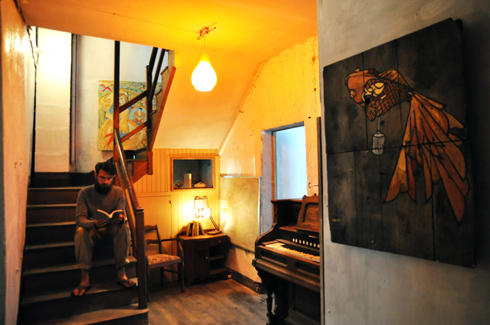 Luxury Logico and the White Rabbit

There was a fascinating video artwork in the White Rabbit Gallery’s recent Beyond the Frame exhibition by Taiwanese art ensemble, Luxury Logico. Shot in the small village of Treignac, France, two alternating clips show a bearded young man working furiously on his Apple laptop while everything around him changes. The walls and what’s on them; the pillars and posts holding up the structure he sits in; the floors, the staircase, the artworks, the light source – all deconstructed and reassembled as he types away, oblivious and obsessed.

In reflecting on this work I have explored a number of possible interpretations, the most obvious of which is: Could it be a parable for our 21st century lives? In the sense that we are always being lured away from present-centred body awareness into a world of infinite abstraction, represented by the laptop and the alternative worlds it embodies.
And what range of improbabilities does the piece itself encapsulate? A private art gallery in Sydney, dedicated to collecting and exhibiting Chinese contemporary art, exhibits a piece by Taiwanese multimedia artists called, of all things, Project Woodpecker.  The piece contains no obvious markers of Chinese origin; the central character is European, and we know that it was shot in an obscure French village using a combination of old-fashioned stop-frame animation bundled with contemporary multimedia magic. Further exploration into Luxury Logico’s practice philosophy reveals a fresh approach to artistic collaboration, more aligned with global industrial design methods than the art world.
Luxury Logico consists of the Chang twins and two friends, who pool their diverse skills—in mechanics, computing, music, theatre design, lighting and photography….They liken their group to a Transformer, one of those modular toys that can be folded and rebuilt in a variety of forms.The artists say they want to encourage recycling and also convey optimism about a high-tech future. (DigiArts, 2010)
The notion of movement – people, ideas, objects and information – as a constitutive element in shaping new social formations, and new paradigms for social science, is the subject of an article I have recently read (Urry, 2007). In the case of Luxury Logico, the movement of disciplines, languages, geographies and digital products, has produced an interaction – between me, the viewer, and the artwork – that has lodged itself in my consciousness long after the event. And from there another form of movement has occurred – the event as stimulus for further reflection in this blog. Of course, some things don’t appear to move, or move at a different pace. Movement as a lens for inquiry is, however, a fresh approach. I’m sure the ancient Greek philosopher Heraclitus would agree; he was, after all, the author of the now famous quote: You can never step into the same river twice.