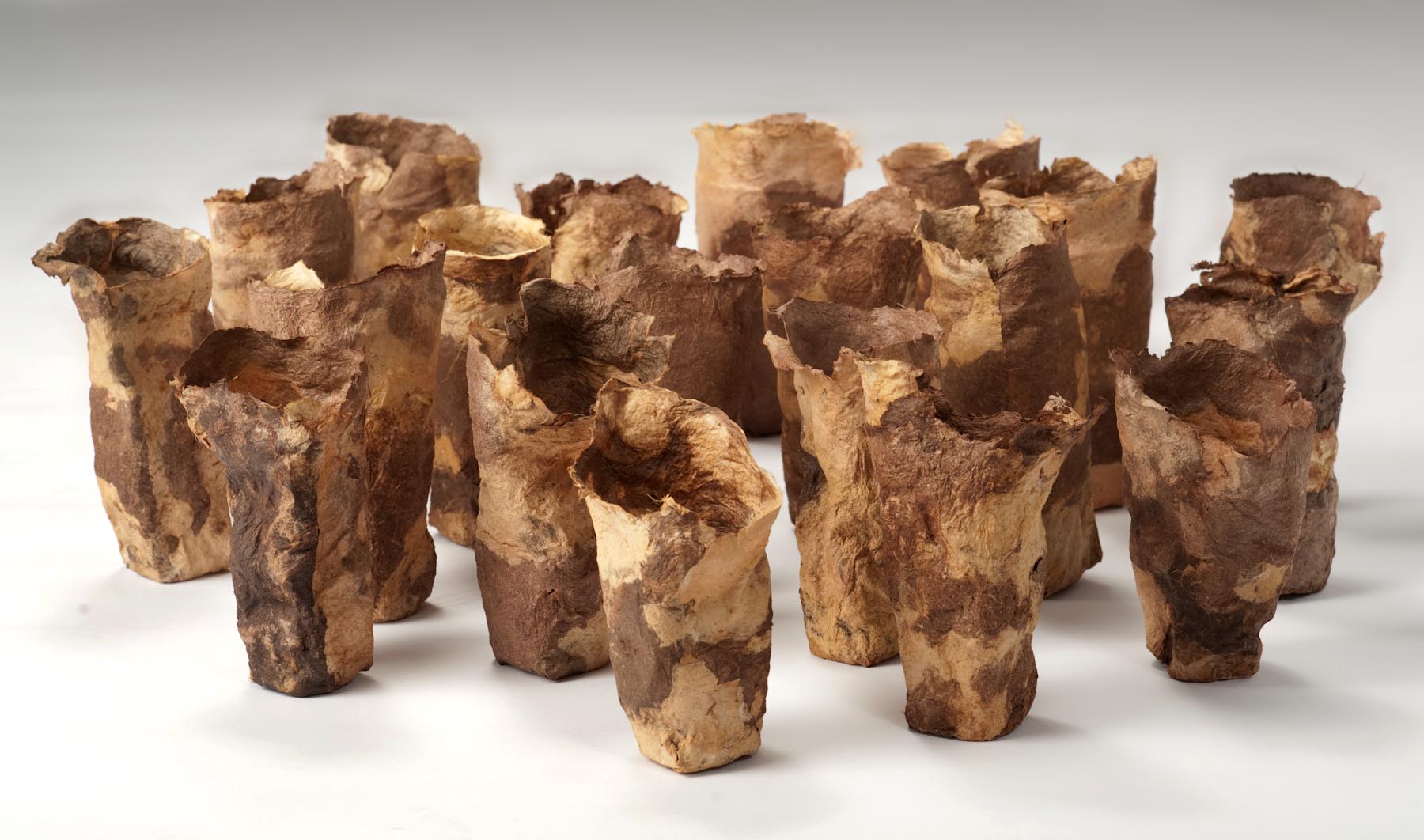 Texture and spirit – the fibre art of Meg Viney

The lush landscape of Victoria’s south Gippsland region is home to many things – dairy cattle, organic produce, a wild coastline fronting the notoriously fickle Bass Strait, and a thriving arts community. Close to the small town of Meeniyan, where the second series of the ABCTV show Bed of Roses was filmed, is an even smaller town called Stony Creek. That’s where fibre artist Meg Viney lives, with her dog Wally, stately alpacas, sumptuous orchard, and ethereal, three-dimensional fibre sculptures moulded with paper she creates herself from decomposed vegetable matter.

For Meg Viney, the natural world is littered with fibrous plants, feathers, straw and sticks that will be alchemically transformed into vessels of exquisite beauty. Melding the curiosity of a scientist with the delicate eye of an artist, Viney engages with the world in a spirited, generous and respectful way; not only in terms of art making, but also in terms of community building, which is how we first met.

In response to the 2009 Victorian bushfires, Arts Victoria moved quickly to put a grants program in place that would support community healing through the arts. Viney applied for a grant that would enable her to work with women in bushfire affected Boolarra to create a quilt called ‘A Stitch in Time’. In 2010, I was involved in evaluating the success of the initiative, travelling throughout eastern Victoria to interview grant recipients. It was there, in her Stony Creek home, that I encountered her artwork for the first time.

a world of fibre

“ When I’m looking, I’m also wondering,“ she told me, mainly about the fibrous potential of almost every piece of vegetation that crosses her path. Take the quinces outside her kitchen window: “Quinces cook very long and slow. I realised that they must be very fibrous. And, yes, they make the most divine cherry red, highly textured paper.” Eucalyptus… “I’ll look at eucalyptus leaves and think, well, koalas eat these leaves because they have a lot of fibre…that means paper. I tried it and it makes the most beautiful chocolate-brown, rich paper. I worked out that if a vegetable has high fibre, probably the leaves would have high fibre too.” So she experimented with the leaves of potatoes, parsnips, rhubarb, and corncob husks.  She….” cut off the tops of potatoes and cooked the leaves up, and it’s the most divinely textured paper. I did the same thing with parsnip tops, gorgeous paper. I’ve got a local supermarket collecting sweet corn leaves for me, and cauliflower and rhubarb. So I’m doing these long cylindrical forms, quite elegant actually, and they’re all covered with this gorgeous textured, green-coloured paper.”

The process requires patience and attention. “I need to be patient to the extent that I’m weather-dependent,” she explains. “I can’t do the drying outside if it’s raining, so I have to gear myself to say, well, I’m at the mercy of the earth I live in for the materials, the weather, and the time.”

Easily distracted at junior school, Viney knuckled down in her senior years displaying a tenacious discipline. Eschewing university, and still unaware that she harboured artistic talent, she first chose secretarial studies followed by nursing. But something was clearly missing; it wasn’t until she was living in California in the 1970s with her husband, a doctor, a small child, and a case of intense homesickness, that she eventually found it.

At the age of 27 she went to San Francisco University to study philosophy, dabbling in craft classes on the side. Unexpectedly, she soon faced a crossroad – to stick with philosophy, or to pursue art. She chose the latter, graduating with a Bachelor of Fine Arts and a major in fibre sculpture. Growing disenchanted with her marriage, what she saw as the transience of Californian society, and the destruction of the natural environment around her, Viney returned to Australia with a new appreciation for its landscape. A highlight of Viney’s fifteen years in America was the reverential approach to nature she observed in Native American cultures. For these cultures, “everything has a spirit; everything is respected.” This sensitivity to the natural world and respect for each part within the whole began to influence her thinking and her artwork.

Echoes from the Garden – Orchard prunings and paper

In 2004, Meg Viney began a Masters of Visual Art in Fibre Sculpture at Monash University. The process further developed her techniques and consolidated her trust in using dreamlike states and the language of the unconscious to suggest ideas for individual artworks, a process she had come to appreciate in Native American art practices.

Like the philosopher she initially thought she would become, she draws on Hegel to explain the dialectic that transmutes fibre and concept into an entirely new ‘synthesis’. “When I was doing my Masters, we were asked to read a book by Ben Shahn called The Shape of Content, I loved his concept of the inner critic and his notions of harnessing the inner critic; instead of saying ‘you can’t do that,’ the inner critic becomes part of the Hegelian dialectic, the triad. There is the artwork, the artist, and there is the inner critic, each informs the other until you know that the work is complete. Once I read that, I went ah-ha! I’m going to harness my inner critic and put it on my team.”

And that’s where sisu probably comes in, I say: directing one’s attention to that inner creative process and sticking with it while its twists and turns take us into the unknown. A process psychoanalyst Marion Milner documents in her largely forgotten but brilliant work On Not Being Able to Paint. Milner’s experiments with ‘free drawing’ and her psychoanalytic understanding of unconscious inhibitions to creative expression, led her to conclude that the kind of spontaneity associated with imagination could also trigger deep fears about a loss of certainty, of “losing one’s hold on the solid earth.”

“We’re all afraid, “ Viney reflects. “You’ve done the work and you’re at the opening, the work is hung, and you fear that people will come in and go…Yuk!  If I’ve made something and I look at it and think it’s dreadful, before I throw it away, I say: ‘Has it got something to teach me?’ If it does, I’ll keep it. In fact, one piece that eventually went to a collection was like this. I made it over a rock at the beach and I took it home and thought, I can’t really throw it out but what can I do with it? After about two years, I walked into my studio one day and I went, oh, that’s what it is!  A gallery owner in San Francisco asked me to bring some work in while I was living there, and she said ‘what would you like me to have’? I said, ‘what would you like to have’? She said: ‘Meg, never let anything out of your hands that you don’t want to represent you when you’re not here’. So, if I’m not happy with it, it’s not going anywhere.”

If ‘spirit’ means something beyond the material plane, then Viney’s work burrows into our collective unconscious, in the sense that her figures and vessels revivify deeply buried archetypes within the human psyche. But fibre art is a fundamentally material process too.

“Texture is delicious,” she notes. “That’s one of the problems with fibre art; the texture is so delicious, the content can be entirely lacking. With some quilt making for example, the colours and textures can be so gorgeous that actually saying something takes a back seat; it’s purely craft. The challenge for me was to move right away from that. The first thing for me is the concept; the second thing is the medium. It’s important for me not to make a gorgeous piece of paper, and then say: ‘Isn’t this gorgeous?’ Because it’s not saying anything.”

I ask Viney what she is trying to say, and she responds thoughtfully.

“I think it’s about integration. The extent to which we achieve wholeness in our lives is in direct proportion to how well we are able to integrate body, mind and spirit.”

Viney told fellow Gippsland artist Deborah Milligan in 2010: “ My choice of materials began during my first years in California. I saw a pine-needle basket in a shop in Berkeley and decided that I would teach myself to make them (there was a copse of long-needled pines close to our house).  I loved the smell, the feel and the meditative rhythm of stitching.  And I loved the end result of the finished work, and that, somehow, these containers went some way to containing me. Once I had become aware of Nature’s astounding resources, I loved the idea that, by paying attention, a wealth of natural fibres was available.”

Exhibition: Meg Viney will be exhibiting her latest work in May 2011 at the Celia Rosser Gallery in Fish Creek, Victoria. Titled Time Warp, the exhibition includes two other Victorian artists, Lorraine Connelly-Northey and Mandy Gunn.