When the University of Adelaide’s Hub Central opened last September, students found the doors open at 7.00 in the morning, and by 10.00 the new learning hub was packed. And why wouldn’t students want to hang out in such a vibrant space – after all, they co-designed it. What is now Hub Central was once an undistinguished thoroughfare linking the Barr Smith Library to the Hughes Building on the University of Adelaide’s North Terrace campus.  Its transformation into a three-level, 24-hour learning and living facility that blends library, study, communication and learning spaces with kitchen, viewing and resting niches, has people raving – even the sceptics. 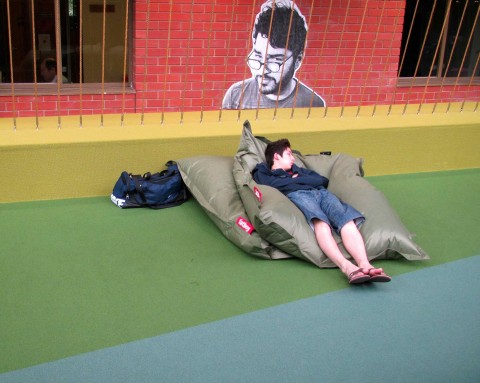 Hub Central’s Manager, Hedley Reberger, who confesses that he too was once a sceptic, says: “If you had wandered in here on day one, you would have thought the students had been here forever.”  Most days, intense conversations emanate from the 22 project booths and rooms; the 200+ computer terminals and two Skype booths are booked out; each week six printers spit out 150,000 sheets of paper; many academics now use the space for more casual discussions with students, even bringing along pizza to share; the kitchen remains clean, perhaps to spite those who predicted disaster; and, natural light is filtered through a specially designed, environmentally sound screen-printed canopy, bathing supine bodies lounging on khaki bean bags, either reading, sleeping, or engaging in more amorous and less academic activities.

Why has Hub Central been embraced so enthusiastically?

Thanks to the Federal Government’s Better Universities Renewal Funding Scheme, the university attracted over $400 million for infrastructure development; around $20 million of the $42 million total build cost was allocated from this fund to Hub Central. The surprise element in this equation was the ratio of funds dedicated to consultation and collaborative design – between students and academics, architects and interior designers, builders and accountants. Adopting a student-centric design process could easily have been a shallow promise in the face of conflicting views held by academics and administrators, mainly because that’s how it traditionally pans out. But it is the seriousness with which this design process was conceived and executed that flipped Hedley Reberger from sceptic to passionate advocate.

After Hassell Architects came up with a working concept for the space, students and faculty were invited to form a joint reference group and ongoing governance body.  A graffiti-style ‘What Wall’, situated outside the library, became a magnet for feedback and ideas from passers-by.  The reference group went on tour throughout Australia to look at what other universities had done or were in the process of doing. All up, the consultation process included 9,000 student hours and 3,000 staff hours. 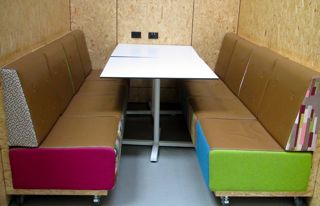 And what did students want? No useless signage for a start, or messy poster boards. Now, 18 digital signage screens display information and keep track of computer availability, thanks to special digital signage content developed by Hedley’s team. Most of all, students wanted a self-contained versatile space – a communal space where they can work, relax, nap and eat. And, amongst other things, a sandpit surrounding an island of computer terminals; an apparently impractical idea that had to be re-imagined. What’s significant though, is that it was re-imagined and not simply dismissed.

“It’s tempting to think in polarities,” Hedley reflects. “Either you have traditional classrooms or technology-centred hubs; our aim was to create a middle ground, a community heart.” The space they created is designed for experimentation, not just spatially, but also in terms of learning, communication and inter-disciplinary knowledge sharing. Hedley’s team, for example, consists of six staff with a brazen motto: Every issue – one stop, one step. But there’s a lot that needs to happen behind-the-scenes to live up to this promise; intense negotiations across the university for a start, and that often requires an outlier like Hedley to push for change and sidestep despondency when roadblocks appear.

When I walked into Hub Central with my colleague, Monica Redden, I was instantly smitten by the space. Without knowing a single fact about its genesis, I sensed something new, and, through my eyes, something beautiful, real and original. Could it be that Hub Central’s fresh vitality is an end product of the university’s commitment to transform student experience by putting students at the centre of decision-making? If so, then it hasn’t happened by chance, or by being naive when it comes to tough negotiations.”It’s a waste of time trying to build bridges,” says Hedley. ” If we really want innovation, we should be blowing them up.”  Presumably, that means ripping apart stodgy silos and endless reasons why things can’t be done, and replacing them with partnering agreements based on establishing common ground. The Barr Smith Library, for example, wasn’t keen about ceding some of its floor space to Hub Central. Now, with a couple of ex-library staff on Hub Central’s service team, the task is to work out how the two services – Hub Central and library – can work seamlessly together.  The Maths and Writing Centres are also co-located in Hub Central. Not only have drop-in numbers increased by 470 per cent, but the experimental spirit that infuses the space has also triggered new ideas about how the two services can work together to do things differently. In effect, they have to – the massive increase in numbers has disrupted business-as-usual for good.

Hedley’s kinetic energy also suits the space, which celebrates the flux and flow of student life. Most things are on wheels or light enough to move easily – sofas, stools, worktables, beanbags, Aalto-style low cardboard stools, Moo Cows or ‘Mobile Computers on Wheels’ (a real hit with engineering and architecture students), and mini-whiteboards. “We’ve had to remind students that the whiteboards belong in the Hub,” says Hedley, “and not in seminar rooms on the other side of North Terrace!” Otherwise, dragging stuff around is what Hub Central is all about. 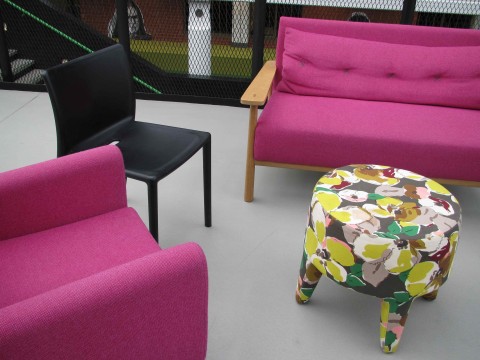 Thanks to Hedley Reberger for taking time out to speak to us, and to the university’s creative Careers Service team for choosing Monica Redden Consultancy and Project Sisu to facilitate their annual planning day. 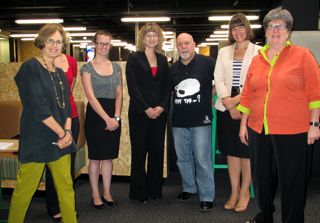