It’s probably hyperbole to say that you have changed my life. Better to say – enriched, expanded, deepened and consolidated.

The story of The Pikettes started the minute your magisterial study of wealth, Capital in the 21st Century, was released in English.

Propelled by a keen and urgent need to understand what’s really going on – NOW – we asked ourselves: Were things as bad as they appeared to be? After 30 years of so called economic reform, were our early heartfelt and idealistic struggles for social transformation in tatters – trashed, ridiculed and going backwards?

Over eight months, always on a Sunday, accompanied by a communally prepared lunch, we dived giddily into your book searching for evidence and answers.

None of us started this quest with much in the way of economic or financial literacy. We are all firmly located at the art, culture, humanities end of the human intelligence spectrum.

One of the things we quickly realised was that we were in the hands of a generous and gifted teacher. While your book is certainly dense and demanding, there is no unnecessary obfuscation. To be sure (one of your favourite phrases), there are endless graphs, formulae and tables, but you go to great lengths to help the reader understand the long term structure and dynamics of wealth accumulation and its inevitable shadow, inequality. I found your tone reassuring. I imagined being in one of your classes at the Paris or London School of Economics watching you explain the capital/income ratio (ß), or the fantasy of trickle down economics, or, best of all, the surprising parallels between today’s markers of wealth and the 19th century worlds of Jane Austin and Balzac.

The inequality r>g implies that wealth accumulated in the past grows more rapidly than output and wages. This inequality expresses a fundamental logical contradiction. The entrepreneur inevitably tends to become a rentier, more and more dominant over those who own nothing but their labor. Once constituted, capital reproduces itself faster than output increases. The past devours the future. (Piketty p. 571)

how we went about it

Perhaps it was the art/education/culture nexus of our respective histories that brought a creative and idiosyncratic tinge to 4×4+TP.

For a start, our different learning modes were respected and utilised. Some preferred the audio version of your book, others the text, sometimes it was a combination of the two.

Flip chart paper with hand-drawn graphs depicting  r>g,  the U-shaped capital/income ratio curve, and the 1 percent’s share of wealth draped the banisters and coffee tables of our appointed meeting space. We created artwork summarising your key arguments and acted out how we would explain these to a nine-year-old. We watched movies like Portrait of a Lady to immerse ourselves in the class based world of inherited wealth that restricted opportunities and mobility for 19th century Europeans and Americans. The world that was supposed to have been obliterated but, Lazarus-like, has reappeared in a new incarnation – the rise of the ‘super manager’ and everyday rentier. We shared links, articles and event invitations to sustain attention on the task and energise our reading for the next session. A lot of this additional material related to the current situation in Australia, which is sometimes alluded to in your book and which, in spite of national myth making about how egalitarian we are, is just as unequal as the rest of the developed world.

At some point, after Jan began addressing us as ‘sister Pikettes’, we started to call ourselves ‘The Pikettes’. Somehow this seemed right; a respectful way of capturing the playful but serious tone that infused our intellectual quest.

Broadly speaking, the rise of the supermanager is largely an Anglo-Saxon phenomenon. Since 1980 the share of the upper centile in national income has risen significantly in the United States, Great Britain, Canada, and Australia…..In all the English-speaking countries, the primary reason for increased income inequality in recent decades is the rise of the super manager in both financial and non financial sectors. (Piketty, p. 315)

As you argue, and mathematically quantify, the current extremes of wealth in western democracies like France, Great Britain, the United States, Japan, and parts of Europe, are as pronounced today as they were during the Belle Epoch. The only period of history that can be roughly described as egalitarian was the mid 20th century when ‘capital’ had been brought to its knees after two devastating world wars and a violent economic depression. Reagan, Thatcher and the neoliberal economic orthodoxies they employed certainly fixed that. Since the 1980s, the capital/income ratio has swung determinedly in favour of those who have the means to accumulate capital or inherit it.

…from 1977 to 2007, we find that the richest 10 percent appropriated three-quarters of the growth. The richest 1 percent alone absorbed nearly 60 percent of the total increase of US national income in this period. Hence for the bottom 90 precent, the rate of income growth was less that 0.5 percent per year. These figures are incontestable, and they are striking: whatever one thinks about the fundamental legitimacy of income inequality, the numbers deserve close scrutiny. It is hard to imagine an economy and society that can continue functioning indefinitely with such extreme divergence between social groups. (Piketty, p. 297)

We need a political solution, not a violent revolution. And, along with a substantial investment in accessible education and skills training, that has to include something I never imagined I would be interested in – tax policies. You have a lot to say about this, culminating in your admittedly utopian suggestion of a progressive global tax on capital, or at least a regional one of sufficient scale to minimise the flight of capital from a particular jurisdiction.  You’ve copped a lot of flack for this, with many commentators using it as an excuse to attack the fundamentals of your analysis. But it will happen one day, Professor Piketty, it has to in order to avoid an even bigger disruption.

As you point out, although Marx was wrong about many things, his concern about the destabilising effect of accumulated wealth was spot on.

what did we learn?

I have canvassed The Pikettes, and the general consensus is that your book has bestowed confidence and invoked gratitude. The confidence to move beyond slogans and understand the dynamics of wealth accumulation and inequality; the confidence to resist, unpick, and stand up to the hegemony of econometric thinking and the unbalanced values it embodies.

Most of all, gratitude to you, Professor Piketty, and to your scholarship, dedication, and commitment to accessibility.
“The success of my book shows there are a lot of people who are not economists but are tired of being told that those questions are too complicated for them,” he says,

“Too often, economists build very complex mathematical models to look scientific and impress people. I have nothing against mathematics — I initially trained as a mathematician — but it’s usually to hide a lack of ideas. What pleases me is that this book reaches ‘normal’ people, a rather wide public. My mother is one example,” he says, adding that she rarely reads big academic books yet understood everything in his. (FT, 2015)

You recently told a journalist that you were still young, and have more books to write. To be sure, The Pikettes are waiting in the wings.

Another book? Another chance to stage a comeback.

..it seems to me that all social scientists, all journalists and commentators, all activists in the unions and in politics of whatever stripe, and especially all citizens should take a serious interest in money, its measurement, the facts surrounding it, and its history. Those who have a lot of it never fail to defend their interests. Refusing to deal with numbers rarely serves the interests of the least well-off. (PIketty, p. 577)

r>g: “When the rate of return on capital exceeds the rate of growth of output and income, as it did in the nineteenth century and seems quite likely to do again in the twenty-first, capitalism automatically generates arbitrary and unsustainable inequalities that radically undermine the meritocratic values on which democratic societies are based.” P.1

forces of convergence/divergence: convergence = the diffusion of knowledge and skills and is healthy for democracies; divergence is when capital/wealth is accumulated and concentrated in a smaller percentage of the population

rentier: A rentier is a person or entity receiving income derived from patents, copyrights, interest, property etc. ie income from ‘capital’ vs wages 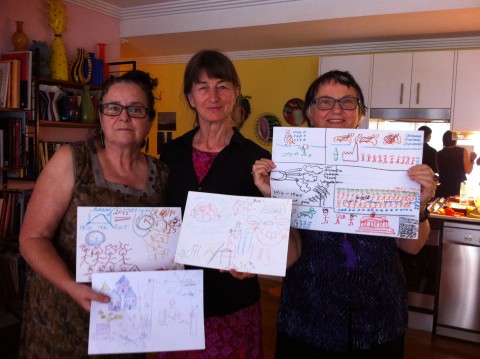 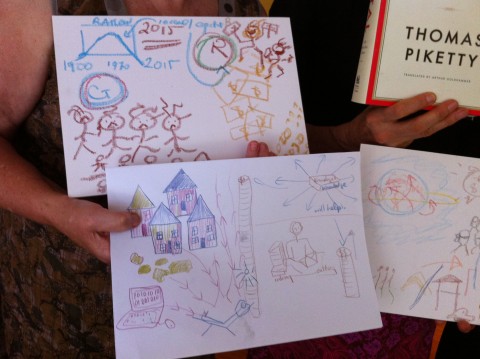 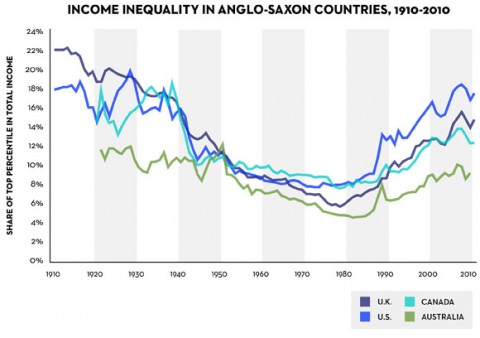 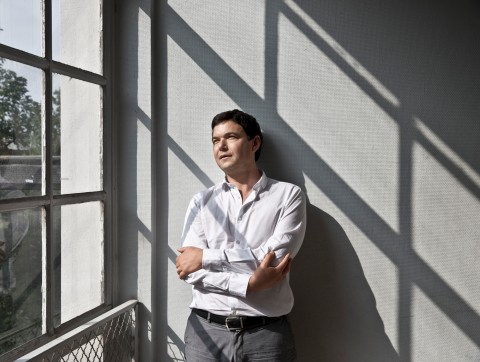 Thomas Piketty, at the Paris School of Economics. 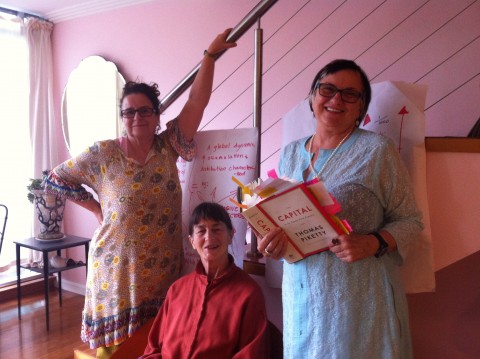