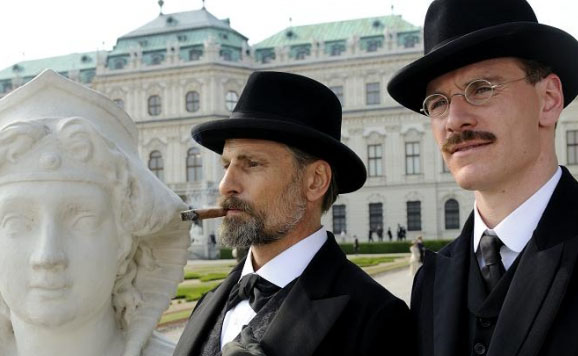 The film A Dangerous Method, is essentially about the relationship between Carl Jung and Sigmund Freud, two of the 20th century’s most original thinkers. Thrown into the cinematic mix is Jung’s psychoanalytic treatment of Sabina Spielrein, with whom he has a torrid affair and who eventually becomes, herself, a brilliant psychoanalyst. These days we recoil from the fuzzy professional boundaries both men navigated in relation to their patients, colleagues and families. They were inventing a new way of understanding the human psyche; they floundered and fought and fumed about the other, as though engaged in a mythic struggle. I think their intellectual curiosity was heroic though, and revolutionary.

Jung’s insights, in particular, have a special relevance to my work. Perhaps as a consequence of his dramatic disillusionment with Freud, Jung pursued a more speculative path, which led to an investigation of  the different patterns of mental processing he observed in himself and his patients. His work formed the foundations of what is now known as the Myers-Briggs Type Indicator (MBTI). As an accredited MBTI practitioner, I have found it a useful medium for understanding and describing differences between people. My enthusiasm has often waxed and waned, but was recently revived when I had the chance to work with the Administrative Appeals Tribunal’s cohort of district and conference registrars. I held individual sessions with 26 registrars from across Australia. We talked about how the MBTI could provide insight into the strengths and challenges underpinning one’s preferred mode of perceiving and thinking. And, of course, how these patterns of mental processing play themselves out in our relationships with others – as colleagues and clients.

Like any tool, the MBTI can be used as a blunt instrument, or sensitive mirror. Over the years, I have found it robust and rich.

For an interesting discussion about A Dangerous Method, check out The Philosopher’s Zone.