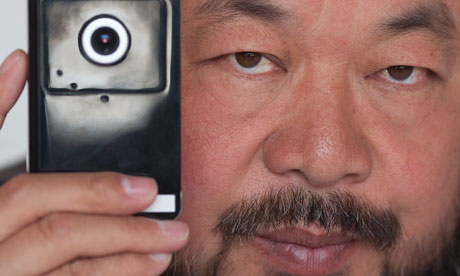 Ai Weiwei is a contemporary installation artist, sculptor, and designer of the beehive stadium for the 2008 Beijing Olympics. Taunted, bashed, imprisoned and hounded by Chinese authorities repeatedly over the last few years, Ai Weiwei is indefatigable in his quest for democracy and free speech. I’ve been fortunate to see some of Wei’s artworks (at the White Rabbit and Sherman Galleries in Sydney), and to sit through a rare screening of his six hour documentary Fairytale, which records the high and lows of assembling 1,001 Chinese people to attend the 2007 Documenta art festival held every five years in the German town of Kassel.

In 2010, Wei was arrested and imprisoned for 81 days on trumped up tax evasion charges, after which he faced a period of house arrest in order to prevent him from attending a ‘goodbye party’ to his newly built Shanghai studio, which authorities were about to demolish. Although no longer under house arrest, Wei is still under constant surveillance, is subject to travel bans which prevent him from attending his own international exhibitions, and is now facing new charges of pornography, bigamy, and conducting “illegal foreign exchanges.” In April 2012, while still under house arrest, Wei installed four web cameras in his home, positioned over his computer, bed and courtyard, which streamed 24 hour video feeds via his website. Intended to commemorate 100 days since his initial imprisonment, Wei also included supportive Tweets from his many admirers, deliberately flouting his bail conditions by doing so. After four days, Chinese authorities had closed down the site (weiweicam.com) and instituted a range of bizarre new charges (bigamy etc.). Standing up to the “big machine”, as he describes it, has cost him a new studio in Shanghai, imprisonment, physical assault, and imminent bankruptcy. In spite of this, his courageous display of sisu remains undaunted.

“This is a gift to public security because they follow me, tap my phone and do what is necessary to get ‘secrets’ from me. I don’t have secrets,” Ai said, pointing out there were now 15 surveillance cameras within a 100m stretch of road outside his home, making it the most-watched area of Beijing. (Guardian, April 2012)

I thought of Ai Weiwei as I read Anna Reading’s article The Playful Panopticon (2009), part of my studies in the Masters of Convergent Media program at the University of Western Sydney. The term ‘panopticon’ was first used by British social reformer Jeremy Bentham in the late 18th century. Bentham designed an architectural model for institutions requiring new methods of surveillance. Called the Panopticon, the model

would enable prison guards located in a central tower to observe individual prisoners in their cells without being seen in return; this unequal gaze would induce prisoners to regulate their behaviour accordingly, as they would never know when they were being observed or not. While the panopticon in Bentham’s time was positioned as a progressive strategy, its underlying power imbalance, it’s “unequal gaze”, was famously interrogated by French historian Michel Foucault in the 20th century. The sprawling prison system that emerged in the 19th century, replete with ornate disciplinary codes permeating a range of institutions beyond the penitentiary, had the effect, in part, to induce a more docile human subject; a rule observer and self monitoring worker bee ideally suited to the demands of industrial capitalism. While Foucault had, in general, a more nuanced and dynamic view of power, the panopticon encapsulates its vertical manifestation, in the sense that the exercise of power is authoritative and hierarchical.

“The Panopticon is a machine for dissociating the see/being seen dyad: in the peripheric ring, one is totally seen, without ever seeing; in the central tower, one sees everything without ever being seen.” Foucault, 1977

Contemporary examples of the panopticon can be found in the widespread use of CCTV cameras, particularly in Britain; political and corporate monitoring of various forms of digital communications (dataveillance); and the way in which ‘private’ data gathered from corporately owned social media sites can be on-sold to advertising and marketing agencies. But social networking platforms have also given rise to a ‘playful panopticon’; a  form of voluntary surveillance that involves assembling and circulating  photos, blogs, tags, links and cross-feeds across multiple social media platforms, enabling our chosen personae to be seen and watched by overlapping networks of people, well beyond our immediate circle. So, while Foucault’s panopticon enshrines a vertical form of power (top down), the ‘playful panopticon’ is potentially horizontal. Some argue (Koskela, McGrath in Reading, 2009) that this performative aspect of surveillance constitutes a political act: by reclaiming a sense of agency in how we are seen and watched, we become a subject and not an object of conventional surveillance practices. For me, the idea of voluntary surveillance as a political act would need to be supported by a critique of existing power relations and a conscious and deliberate strategy to invert them in some way. When it comes to the everyday exchanges that populate social networking sites like Facebook, I don’t quite see the connection; but when it comes to Ai Weiwei, I do.

While Chinese authorities have pulled out all stops to try and normalise Ai Weiwei’s behaviour, he is clearly not for turning. Wei knows the panopticon encases his every move, and he’s using his artistic imagination and worldwide reputation to unsettle it. If Foucault were alive today, I think he would be fascinated by evidence of this ‘playful panopticon’, and intrigued by a character like Ai Weiwei.