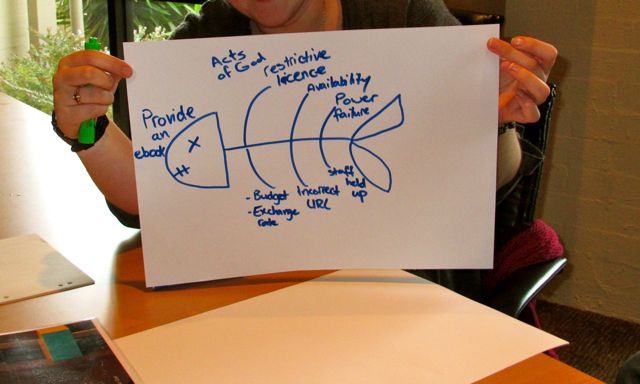 Using different words in place of our habitual corporate jargon can sometimes trick us into abandoning the knots that bind us to the same old thinking. Of course,  jargon, acronyms, flowcharts and linear planning methods have their place; they lend our organisational practices a halo of authority, rationality, common sense. But when they fail to deliver fresh perspectives on intractable problems, shouldn’t we turn our backs on them for a time and try something else? A bit like twisting a kaleidoscope to reveal a new pattern, or hanging upside down like a bat, or walking down the street in search of anything and everything that is yellow. A waste of time? Maybe not.
The Sisu Bento Box contains tools that help teams see a problem from a different angle. We don’t recommend hanging upside down like a bat unless you already do yoga. But re-framing language is high on the list. Here is an example of what I mean.
I  worked with two teams from a university library some time ago. Their work was interconnected and included, in part, acquiring e-resources for students and academic staff. Publishers aren’t that keen on making it easy for libraries to provide e-books and e-resources to their clients in an open-ended way. Licensing arrangements vary, and can often get unnecessarily complicated. Frustrations abound.
We decided to map the entire process using an old-fashioned analog method. No flowcharts, no fancy technical terms; just ten or so human beings standing in for each step in the process chain and describing its Moments of Magic and Moments of Misery from the client’s perspective. It was fun, and useful too. All of a sudden things didn’t feel so burdensome, or lifeless, or impossible to change.
We dipped into the Sisu Bento Box then for more tools. Deploying the 4R’s across the extended team of 45, we tossed around more ideas relating to the Moments of M.

Reverse Gear: How do we exaggerate the Moments of Misery?

One team used Reverse Gear to exaggerate the Moments of Misery, making them ten times’ worse. Another grappled with Revolution – how to intensify the Moments of Magic with half the staff and half the budget. Entering a universe of Related Worlds, another team asked: Who consistently produces Moments of Magic from a customer’s perspective, and how do they do it? Two additional teams seized on the Re-expression theme at the heart of the whole exercise, and wrestled with marketing phrases that would sum up the value of the library’s digital acquisitions work to its broader university stakeholders using sentences starting with M. The alliterative phrases these two teams produced, in under ten minutes, were so good that even Madmen’s Peggy Olsen and Don Draper would have been green with envy.

An issue that is taxing the imagination of most libraries around the world cannot be solved in a day. But people’s feelings about it can shift. Where feelings go, attention often follows. We know that when people are excited by learning something new, certain chemicals are released that reinforce the pleasure involved – dopamine and acetylcholine in particular. This is further enhanced by novelty, surprise, and the opportunity to solve a puzzle. If stressed, confused or frustrated, then cortisol is more likely to be a feature, and cortisol tends to excite the limbic parts of the brain (flight-fight-freeze). Neurons that fire together, wire together: synaptic linkages made in one part of the brain, can affect other parts. The attention and focus elicited not only helps us learn from experience, it actually helps restructure our brains. Having laid a learning pathway, we are then in a better position to externalise our knowledge and want to share it. A big leap? No bigger, in my opinion, than believing that documents and strategies littered with managerial catchphrases will incite acts of innovation, ‘transformational thinking’ or ‘disruptive change’. Yet few organisations stray from that well beaten path. I’m glad we had a day together littered with Moments of Magic and dollops of revolution.